The Research In Motion or RIM, which is a topnotch in wireless innovations, has reformed the concept of the mobile industry when it introduced the Blackberry in 1999. It continues to create systems that effectively connect people. Its product lines comprise the Blackberry Playbook Tablet, its famous smartphones, and its software for many businesses, as well as accessories.

The new Blackberry Z30 smartphone runs with Blackberry 10 operating system version 10.2. It is considered the fastest and the most advanced mobile phone, as of the moment. It has 5 inches touchscreen and loaded with new interesting features. It has the biggest battery that provides longer power. 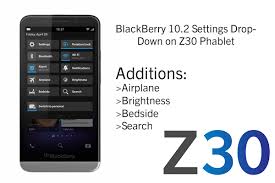 Here are the new important features of the new BlackBerry Z30:

• The 5-inch Super AMOLED display provides you with bigger and clearer whatever you are running in its screen. It includes 1.7 GHz processor with quadcore illustrations that makes the surfing quicker and the details of the games are more specified.
• This BlackBerry Z30 has a 2880-mAh battery which is enhanced with the BlackBerry 10 OS version 10.2, you have up to 25 hours of mixed use. However, there are many factors that can affect the life of the battery such as application use, the feature configuration, network connectivity, and the battery age.
• BlackBerry Priority Hub allows the users to find quickly the messages and information they need. It has the capability to gather top list and important messages from your email, social network, and your other accounts. It also helps you organize your priority tasks.
• BBM allows you to get a preview of the incoming message in any application that you are using, and it allows you to delete or press it to read the complete message. And in cases where smartphone is locked, you can immediately press the different icons found on the Lock Screen to preview the most recent messages or notifications.
• This BlackBerry Z30 mobile phone has a new antenna system called Paratek Antenna, tunes the reception to provide you with good connectivity in places where there is low signal. This antenna gives you quicker transfers of information and lesser missed calls in low signal places.
• This smartphones has stereo speakers, giving you a special experience with your music, apps, games, and videos. It also has the capability to make your phone conversations as if you are actually facing the person whom you are having a conversation through this phone. This Natural Sound is restricted to BlackBerry and some of the BlackBerry 10 OS version 10.2.

The BlackBerry 10 OS version 10.2 may be available for BlackBerry Q10, BlackBerry z10, and BlackBerry Q5 mobile phones by the middle of October 2013 which may depend on the approval of the carrier.